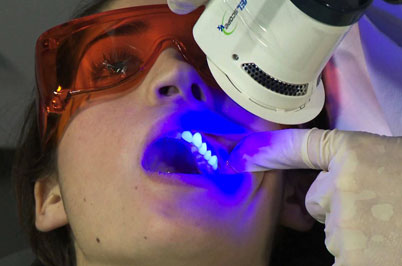 One of the most frequent and deadly types of cancer is oral cancer. Over the past fifty years, significant progress has been made in the area of diagnosing cancerous growths in most parts of the body such as the mammary glands and the prostate, but almost no progress had been been made in diagnosing oral cancer. This is significant because oral cancer is no less frequent than the previously mentioned cancers and the survival rate is an abysmal thirty percent. But help is on the way.

LED Dental has developed a device that has proven extremely effective in detecting oral cancer at its beginning stages. This device is known as the VELscope . The VELscope uses a handpiece that shines a blue light into a patient’s oral cavity. Abnormal tissue growth appears as a dark spot, with the surrounding healthy tissue appearing fluorescent.

Previously, diagnosis of oral abnormalities was done by the unassisted eye of a dental professional. While this was the most effective way of diagnosing a patient’s condition, it was ineffective in detecting oral cancer at its earliest stages.

The significance of the VELscope can not be underestimated. For the first time, dental professionals have a tool that is able to aid in a diagnosis in a way that has never been done before. That it does so in a non-invasive manner and painless manner is doubly noteworthy. And furthermore, the whole process is done within two minutes.

So innovative is the VELscope, that the World Health Organization has honored it as a medical device “which addresses global health concerns and which is likely to be accessible, appropriate and affordable for use in low-and-middle-income countries.”

Oral health is of the utmost importance. Being able to detect against potentially life threatening diseases such as oral cancer is the priority of every dental professional. That we now have a device that is able to do so at the earliest stages of the disease is having a tremendous impact not only on the dental community, but upon the world as well. It is time for everyone to take advantage of this life saving technology. You owe it to yourself.